An enlightened approach to mental healthcare

Hopewood Park is one of the UK’s newest psychiatric hospitals and designed to provide a supportive, uplifting environment light years away from the dark and foreboding institutions of the past. Ray Philpott reports

Cast your eye over serene Hopewood Park with its spectacular hillside location offering views over the North Sea and you could easily imagine you are somewhere in Scandinavia.

Featuring minimalist but attractive low-rise buildings with subtle white, grey and natural wood finishes, it has more the look of a contemporary coastal development in Sweden or Norway than an NHS hospital in England’s North East. Running through the middle of Hopewood Park is an ‘ecological corridor’ featuring buildings covered by ‘living’ flat roofs with plants growing on them and a wetland area to create a habitat for bats and birds.

Whichever way you look at it, Hopewood Park is certainly not most people’s idea of a psychiatric hospital.

It stands in stark contrast to the demolished Ryhope Hospital it is built on, a dour institution that began as a temporary facility during the Second World War. The former hospital utilised some of the psychiatric facilities at the adjacent Cherry Knowle Hospital, built in the 19th century as a ‘lunatic asylum’, pulled down in 2011.

Hopewood Park, in contrast, is a comfortable, purpose-built 122-bed psychiatric hospital with calm and comfortable surroundings. It includes in-patient wards for acute patients, a 14-bed psychiatric intensive care unit (PICU), and retains a recently built 15-bed unit from the old site. It provides urgent care and assessment, rehabilitation for patients and support for older people with mental health illnesses.

The £50 million facility was designed by Medical Architecture working for client Northumberland, Tyne and Wear NHS Foundation Trust. It is part of the Trust’s ProCure 21 project that includes the Rowker and Mowbray Dementia Care Centre at Sunderland’s Monkwearmouth Hospital. Working in conjunction with this and other NHS facilities, the new hospital in Ryhope is now the Trust’s main mental health hub South of the River Tyne.

In terms of layout and design Hopewood Park encapsulates the latest thinking and approaches to mental healthcare, creating a sympathetic and soothing recovery-centred environment both inside and out, with plenty of exposure to daylight. The hospital’s 18-bed ward buildings and PICU are surrounded by safe, enclosed gardens. They share common therapy, amenity and support in a large, well equipped central facility – the Barton Centre – at the development’s heart. The multi-level terrain the site is built on makes it difficult to link the building by internal corridors, so covered walkways have been used, helping to give people the experience of being outside.

The six wards and PICU are laid out on one side of single-loaded corridors, on the other side are white-walled courtyards with lots of planting that bounce daylight back into them. Medical Architecture Director, Paul Yeomans, explains:

“As a patient coming out of your bedroom you immediately get a view of a courtyard, which is unusual in mental institutions. “The courtyards are really important spaces. To all intents and purposes they’re ‘outside’ rooms where a lot of therapy takes place and tension can be defused and released in a safe and secure environment. They’re a highly beneficial feature and one of Hopewood’s most successful.”

The wayfinding through each of the core buildings in the centre has been carefully thought out.

“The general principle is that as you enter the site or a building you first go into a public area, then a semi-private area such as the accommodation followed by a private area where you get treatment and help.”

A calming range of textures and finishes in a restrained pallet of white, wood, grey and slate have been used both internally and externally, creating an ‘outside is inside’ feeling to the buildings. Yeomans says:

“The robust render we used enabled us to create a wall that appears to be coming out of the ground. Elsewhere, composite material provides a pretty authentic wood-effect cladding but offers greater longevity, while plenty of real wood is featured internally – in corridors for example – to add warmth.”

A surefire talking point is the beautiful artwork by artist Dan Savage of Artstop Studios, appearing throughout the hospital and its grounds. His work echoes and references the area’s industrial heritage and history – particularly the nearby listed Victorian water pumping station, shipbuilding and Ryhope colliery – but also reflects the local scenery of Ryhope Dene and the Tunstall Hills.

A specially written poem provides the starting point for range of bespoke patterns that are laser-engraved into oak cladding, etched into tiles, silkscreen-printed on to glass panels and inlaid into decorative paving.

“Dan’s art and patterns are carefully woven and integrated into the design – a great way to use them,” says Yeomans.

Another unusual feature is the site’s ‘ecological corridor’, a wildlife-friendly pathway which came into being in response to the discovery that bats were roosted in the surrounding area.

“We had to take advice from Natural England about how to demolish the old buildings. Bat roosts have been provided but additionally, flat roofs along the pathway have been planted with sedum plants to attract the insects they feed on,” Yeomans points out.

At the top of the pathway is a wooded area and at the bottom end is what is known as a dry lake – a wetland area planted with reeds and other moisture loving plants created by capturing water drainage from the site instead of using an attenuation tank. It’s hoped the feature will eventually become a fully-fledged new habitat, attracting various forms of wildlife such as frogs, insects and birds.

Unlike many older psychiatric health sites, the hospital has been specifically designed so that it doesn’t exist in splendid isolation.

“The site is very close to new and existing housing estates a nursery and a primary school. It also backs onto a newly built hospice, which has been taken into consideration in our landscaping as everyone wanted to encourage a cross-over between the two buildings.

“The trust believes it’s really important for the hospital to involve the local community where possible to reduce the stigma around mental health, so it’s a very open site. In fact, no fencing has been put up anywhere around it, leaving local people free to walk through it if they wish, although there’s no formal right of way.”

Open it may be, but it’s a technically challenging site to build on, due to the fact that the hospital sits on a slope that drops 19m across the hospital grounds and why the project took two years to build before coming into full operation late last year.

“The reward is that, wherever you are, you have fantastic views,” says Yeomans.

To help overcome the terrain challenges, every part of the development was captured in a 3d Building Information Model (BIM) to produce detailed drawings of landscaping, civil engineering, services and the architecture itself.

“Working with the main contractor, Laing O’Rourke, we modelled very early on, which enabled us to do a lot of mapping for stakeholders and user groups. We had a fly-through video made so we could show how the individual rooms would look and the kind of furniture inside them. That proved invaluable.

“From our perspective BIM really paid off, helping us to identify early on where problems might arise, how things work below ground and to locate the buildings accurately.”

The three-storey central building is a mixture of precast concrete and steelwork. The predominately single-storey wards are built from a timber frame supporting a lightweight, highly insulated panel system. Timber frame was chosen because it’s quick to erect and a renewable resource with a good carbon footprint providing good insulation.

Laing O’Rouke is a leader in off-site manufacturing to factory tolerances. The ward panels, bathroom pods and concrete superstructure were among the elements constructed this way. Insulated roof cassettes were pre-tiled offsite and craned onto the buildings – reducing scaffolding, waste and improving site safety.

Heavy glass has been used extensively for its strength and to prevent heat loss while photovoltaic cells, air-source heat pumps and mechanical heat recovery systems have been widely deployed to generate green energy.

Yeomans and his design team are understandably pleased with what’s been achieved at Hopewood Park.

“What makes Hopewood Park unique is its location on a difficult but ultimately very rewarding site. Visually it’s very different to hospitals I’ve seen before because it can be viewed as a whole from any angle, yet there’s no distinctive front or back to it.

“I think we’ve demonstrated a good understanding of how the buildings react to the location and need to contribute beyond their immediate function to help bring a sense of community to the site.”

“The UK has gained a good reputation in designing mental healthcare buildings, particularly since the NHS began putting serious money into this area around 15 years ago. “Other countries are closely looking at what’s going here and we expect Hopewood to attract attention.” 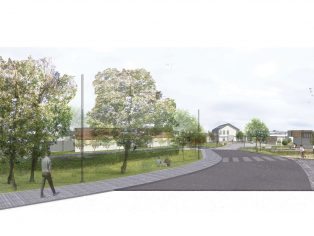