The Acoustic Shells by Flanagan Lawrence, won in international competition, were commissioned by Littlehampton Town Council with the aim of revitalising the town’s seafront – part of an inspired initiative that includes the East Beach Cafe by Thomas Heatherwick , the West Beach Cafe by Asif Khan and the Longest Bench by Studio Weave.

The concept for the shells is inspired by the traditional bandstand, such an integral part of Victorian civic architecture. The first bandstand was erected in the Royal Horticultural Society Gardens in South Kensington in 1861, and bandstands were subsequently installed in parks across the country. The Acoustic Shells are a contemporary reinterpretation of this distinctive architectural form, creating a radically new structure that can accommodate a wide range of music making.

“Littlehampton Town Council’s ambition has been to raise the town’s profile and reputation through the quality of its civic architecture. Flanagan Lawrence’s elegant and innovative pavilions have joined other distinctive public architectural commissions enhancing the town’s seafront.”

One shell faces the town and forms the principal bandstand. The acoustic design of the interior creates a reflective surface to project the sound of the performers to the audience in the sunken garden. The other shell faces the beach, providing a more intimate shelter overlooking the sea.

The shell structures have been created without formwork, the concrete sprayed directly onto the reinforcement mesh. The majority of the concrete shell is only 100mm thick and relies on the double curved geometry to span the stage.

The two shells appear as white land forms emerging from the seafront, echoing the visually striking form of the local sand dunes.

The project was won in competition in 2012 and completed in 2014. It has since won numerous awards, including two RIBA Awards, and the AJ Small Project Award. Flanagan Lawrence also won the BD Architect of the Year Awards 2014 (Small Project Architect of the Year Category) for both the Acoustic Shells project and for Soundforms, an innovative mobile outdoor acoustic performance shell, first used during the 2012 London Olympics.

“The two shells appear as distinctive white land forms emerging from the grass along the seafront. They echo the visually striking forms of the local sand dunes.” 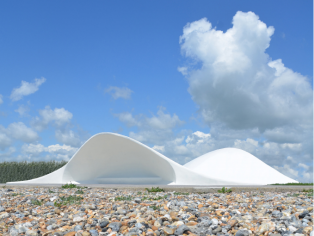 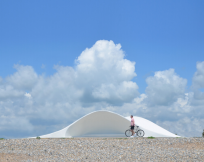