Established by Icsid in 2010, the World Design Impact Prize is an award that recognises excellence and diverse ways of addressing societal challenges. It leverages Icsid’s vast global membership network to champion possible solutions to global issues like poverty and the effects of industrialisation and consumerism on sustainability and society. Ultimately, the initiative also aims to acknowledge industrial design driven projects from around the world that are making a significant difference in the lives of individuals at the most basic level.

During his address at the WDC Design Gala, which gathered over 270 attendees, Dr. Brandon Gien, President of Icsid – the world organisation for industrial design – stated that

“By recognising projects such as the ones submitted for the World Design Impact Prize, Icsid can promote the ever expanding field of industrial design, which drives such recent practices as social entrepreneurship, micro financing and humanitarian design, as well as showcases the value of the design and its impact on systems and experiences.”

There are numerous issues related to the unsafe usage of syringes, but rather than create a new type of syringe (where a single £0.03 device can take years to get FDA approval and millions to produce), the ABC Syringe is an intelligent label that provides an easy way to recognise, which syringes have been used versus those that have not and costs closer to £30,000 to create and takes only 3 months for FDA approval. It is a universal communication tool regardless of literacy.

The patented innovation triggers people’s innate sensitivity to risk through a persuasive colour change via a label which turns red once it has been exposed to carbon dioxide, or more simply, once it has been taken out of its sealed and sterilised packaging warning literate and illiterate patients of prior use – a strategy validated on the streets of Mumbai with 100% efficacy to date. Impact estimation indicates that by year 5, the ABC Syringe could prevent 700,000 unsafe injections, save 6.5 million life years and $130 million in medical costs in India alone.

In his acceptance speech, Dr. Swann thanked his project colleagues Marc Koska, Peter Evans and Helen Moller for their support and acknowledged John Heskett, who sadly passed away this week stating that “Like most of my generation, his book was the first design book I read and set me on my journey.”

The ABC Syringe was among the three Finalist projects for this second cycle of the World Design Impact Prize, including Biolite Homestove; represented by Dr. Ethan Kay and the Refugee Housing Unit; represented by Mr. Johan Karlsson. All three projects were further discussed during a ‘Design and Impact’ workshop the following day.

Haupt of local design gallery Bronze Age, in collaboration with Porky Hefer of Animal Farm. The concept was modelled on the now famous “dolosse” which was designed by South African draughtsman Aubrey Kruger in 1966 to protect the harbour breakwater from stormy seas. Harbour engineer, Eric Merrifield liked the concept and design and it was further developed, cast in concrete and successfully placed along the seaward edge of the breakwater.

The simplicity of the dolos is the key to its success. The dolos works well because it does not resist the power of the ocean. Rather, its three dimensional shape and the spaces between the solid concrete pods, dissipate the energy of the waves. Furthermore, as dolosse interlock loosely with one another, they jointly form an interconnected superstructure that rocks and rolls with the sea. It is one of the only man-made structures that doesn’t get weaker over time but stronger as they knit together.

The World Design Impact Prize trophy features a cluster of six dolosse. One will be attached to the base, the others will be loose to allow for dynamic change in the overall design. 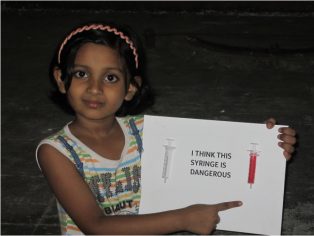