A study in glass

A landmark educational building featuring an innovative use of glazing has lit up a run-down part of the Spanish town of Torrelavega, writes Steve Menary.

A mix of squares, circles and an innovative use of glazing has been used to create a striking new educational facility in northern Spain.

Until last summer, the Caligrama adult learning school at Torrelavega in Cantabria lacked its own headquarters. The town council set out to change that and also to make a regional statement with a landmark building.

Although Torrelavega only has a population of 56,000, the town dates back to the thirteenth century and is the capital of the surrounding county, Valle del Besaya.

The council wanted to create a “new iconic building” that would be a “reference for the future of the region” and achieved that with a heavy reliance on glass and glazing that shone light on a previously neglected area of the town.

The project is located in the run-down eastern part of Torrelavega. The council wanted to use the new building to integrate this part of the town with a new proposed urban space adjoining the site, to be known as Miravalles Park.

Torrelavega Council awarded the commission for this high profile project to an architectural practice that had only been formed the previous year.

The group’s founding principles are described as to produce “a perspective that integrates the user, urban transformation, the development of public space and the environment in which it is inserted.”

This appealed to Torrelavega Council and in November 2009 the commission for the new adult learning school was awarded to 1004arquitectos. The founders oversaw the design, translucent effect and also, crucially, prevents direct sunlight from overheating the interior.

Here, the shape is softer. The architects produced this design to reflect the building’s role as a leisure space. 1004arquitectos also wanted the children’s playground building to be smaller and to blend into the proposed new park.

“Versus the geometric rationality of the school, the playground building integrates in the park as a curved shape that refers to its leisure function,” added the 1004arquitectos spokesperson.

Glass and glazing are also vital to the internal design with glazing allowing for a view into the teaching spaces.

After nearly four years in the design, planning and development pipeline, work started on site in October 2013. Antonio J García then took over as site architect for 1004arquitectos.

UTE Vías-Codelse was appointed as main contractor to build out the designs proposed by 1004arquitectos. On site, Jefe de Obra took charge of the project for the contractor along with site manager, Rafael Ariño.

A6ingeniería were also recruited as the main engineers on the project with Elías Martínez working on the structural elements and Juan Carlos Fernández on installations.

In total, 1,700 square metres of glazing was used to meet the specifications of 1004arquitectos. This was the first occasion that the studio had used this particular glazing system. Instead of looking overseas for materials, all the glazing was sourced in Spain from Cortizo, which has offices in Cantabria and also across Europe.

The structural glazing facade is a high performance curtain wall with a visible grid of flat cover cap and a double-glazing solution. The external is a silk-screened extra-clear glass and the internal is low emissivity coated.

Both are made of tempered glasses to prevent breakages associated with thermal stress. The aluminium structure is made of regular cut mullions, placed following an alternate rhythm of 80 and 160 cm, and transoms separated by the whole storey height to avoid the appearance of a glass partition facing each floor slab.

“The building envelope can be understood as a double skin facade with a distance between both layers big enough to contain the common spaces and the circulation areas, the inner layer encloses the teaching programme. The external layer consists of a double-glazed curtain wall facade with a strong vertical rhythmical modulation and the inner one is formed by a laminated glass with a special acoustic treatment.

“The outer surfaces of the double-glazed facade panels feature a white pattern of vertical lines that produces a translucent effect and prevents direct sunlight from overheating the interior.

“At the same time, the pattern turns the facade into a white-silk skin that gives the building an abstract shape and offers a frosted and light appearance. In the daylight, the motif of the print provides a filtered view from inside to outside, and allows a vaguely transparent view when looking from the outside in. At night the effect is reversed and the building turns into a lantern that reveals the inside.”

Miravalles Park will be created in the future but the design of the project also includes landscaped grounds that will blend into this parkland.

This landscaping emulates the existing sloping topography and also features a pathway from the street at the front to Miravalles Park in readiness for completion of this scheme.

UTE Vías-Codelse successfully finished on site in May 2015 and the project was handed over to Torrelavega Council. For 1004arquitectos, the project has been an unprecedented success for a practice in its own early period of development.

“The building responds to the social demand of the city of Torrelavega,” said a spokesperson for 1004arquitectos.

“At its urban planning level, the project is understood as an access to the future Miravalles Park. This premise defines the building location and ground occupation, in an attempt to release most of the plot as a public space for the city.”

For 1004arquitectos, the Caligrama School for Adult Learning headquarters is quite literally a window into a new future both for mature students in Torrelavega but also the practice itself. 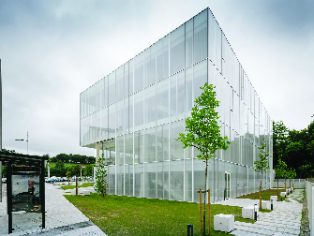 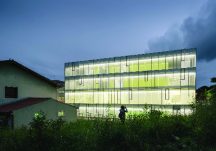