Whether it’s building bridges or delivering homes, there’s plenty of scope for structural steel across the construction sector. Chris Holleron of Hadley Group details the material’s uses, from its invention to its current application in the offsite construction sector

The history of structural steel is long and storied. For many, the tale begins with Sir Henry Bessemer, who first developed the ‘Bessemer process’, a manufacturing approach that allowed high-quality steel to be produced economically enough for use in the construction sector. Prior to this, steel had been ignored by architects, who instead opted to use wrought and cast iron until the very late 19th century. The ‘Bessemer process’, however, changed all of this and allowed a number of industries, which were previously constrained by the lack of steel, to expand. Noticing the immense potential of the technology, Sir Henry Bessemer moved his operation to Sheffield and set up the nation’s first steelworks plant. In doing so, not only did he shape the face of a city, but also he changed the way we would go on to build the world around us.

One of the first industries to benefit from a greater availability of steel was the bridge-building sector. The Brooklyn Bridge in New York was the first bridge to extensively use steel throughout its design. At the time of its construction, it was the longest suspension bridge in the world. Other structures, like the Forth Bridge were also fabricated from steel and completed before the turn of the century. By the start of the 20th century, structural steel had become far more common in the construction, especially in America. It was used to build a number of high-rise commercial structures in Chicago and New York. The trend then followed into Europe and in 1904, the Ritz Hotel, Britain’s first fully load-bearing steel-frame structure, opened in London. However, it is argued that the most famous steel structure from this period was the Selfridges store on Oxford Street. The Selfridges project was one of the first projects to showcase the benefits of using structural steel to expedite building times.

In a rush to open the store, the building’s owner, Harry Gordon Selfridge needed a quick turnaround. What’s more, he wanted his store to feature an open interior and extensive external glazing. Steel-frame construction was the obvious solution, however because the approach was still so new, the project’s engineer had to first agree appropriate building regulations with London County Council. Thankfully, everything had been approved and the store proceeded to open in 1909. Over the following century, structural steel was used to create more of the world’s most iconic towers, buildings and bridges. Most notably, in 1930, around 50,000 tons of steel was used to form the structure of the 85-storey, 378 metre-high Empire State Building in New York.

Once again, the comparative time-saving efficiencies of using structural steel were a huge benefit for developers and the structure was erected in just six months. Unfortunately, as this era became dominated by war, price volatility in the steel market increased and the material became more rationed. As a result, structural steel became much less popular within the construction industry. What’s more, organisations which did plan on utilising structural steel, had to do so more resourcefully. Many were successful in doing so, a great example being Smithdon School in Norfolk, which was built in the 1950s. The building was constructed using steel frame section, but unlike previous designs, the beams and stanchions were exposed both internally and externally.

Not only did it make the building standout, it reduced the need for expansion joints thus reducing the overall amount of steel needed to complete the build. With price volatility calming, structural steel once again became more commonly used for construction projects. Massive steel frame structures like the Centre Pompidou in Paris and Waterloo International Station in London showcased what could now be achieved with steel. More possibilities opened up as suppliers made technical advances in the production process, including the advent of cold-rolled steel, which allowed suppliers to make traditional steel profiles far stronger. Nowadays, manufacturers like Hadley Group can supply units using advanced cold-rollforming processes. The internationally patented process can produce light-gauge steel frame sections, which are four times stronger than traditional steel.

As the units are so light, they can be manufactured offsite before being delivered and installed onsite far quicker than traditional approaches. It’s helping architects and housebuilders to create buildings more efficiently than what could have been achieved previously. For the past 100 years, steel has given tangible benefits to architects looking to create strong, secure buildings. As a result, steel was in many ways the material that defined the last century.

However, thanks to technical advancements, the material now has more practical use than ever before. Who knows – the next century might be defined more by the use of structural steel than the one that preceded it. 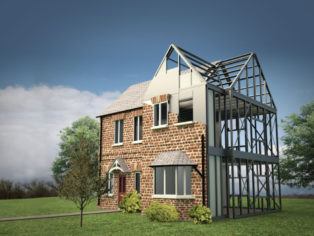 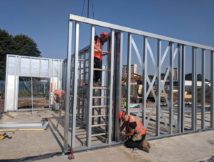