In a quiet corner of south east London, a unique-looking new transport hub is set to transform rail travel and regenerate the area it serves, writes Ray Philpott.

The eye-catching design of the railway station at Abbey Wood has led to it being likened to a vast silver manta ray by a number of observers.

Viewed even slightly from above, the analogy becomes clear, given the flowing, organic form of the curvaceous metal roof covering what is one of the major surface stations on the long-awaited cross-capital Elizabeth Line, which is being delivered by Crossrail Limited.

Surprisingly though, the station was not initially conceived as a definitive, showcase building in its own right. Rather, it is an architectural expression of practical transport functionality and the need to give Abbey Wood a strong civic heart providing a catalyst for further regeneration in the London suburb.

The spacious new station forecourt neatly integrates with Harrow Manor Way, the adjacent dual-carriageway bridge over the railway tracks bisecting Abbey Wood, to create an improved public transport interchange and make it easier for pedestrians to cross the lines.

Abbey Wood is one of 10 new stations being built for the multi-billion pound Crossrail project to create the Elizabeth Line, a new east-west railway. Running underground through the heart of the capital and above ground on the existing network, the 40-station route has four termini: at Reading in Berkshire and London Heathrow Airport on the western section, and Abbey Wood in south east London and Shenfield in Essex to the east.

Network Rail is responsible for the design, development and delivery of the line for Crossrail where it runs on or alongside the existing network. In 2008 it appointed architects Fereday Pollard and engineering consultants Halcrow (now CH2M), to carry out feasibility studies for Abbey Wood station. In 2010 a design and build contract was awarded to the architects, main contractor Balfour Beatty and consultants WSP (previously WSP | PB) as part of a £130m scheme.

The project required the demolition and redevelopment of the existing 1987-built station, building a temporary replacement and changes to track layout that significantly influenced the new station’s design. This included realigning the North Kent Line for existing ‘through’ services run by Southeastern and laying two terminating Elizabeth Line tracks running west to the new tunnel at Plumstead a mile away.

On the upper level, the spacious open-air, pedestrianised forecourt is merged with the adjacent, heavily modified bridge and associated bus services. The forecourt leads into the wide, gently arched, east-facing

At the lower level a second entrance into another smaller ticket hall and ticket barriers, is situated on the north side (Felixstowe Road). The southern side of the station (Wilton Road) features a number of small, street-facing retail units and parking while taxi ranks and drop-off points are accessible from both roads.

On each side of the new station, a staircase and a pair of external glass-faced lifts connect the street level with the bridge level, enabling people to either cross the railway lines via the forecourt or to access the transport services.

The station sits on the border of the Royal Borough of Greenwich and London Borough of Bexley and both plan to take advantage of potential redevelopment opportunities created by the Elizabeth Line. For example, Bexley has a 10-year masterplan for the South Thamesmead area to the north of the station that will see a large number of new homes built close by.

Jan Kroes, director at Fereday Pollard, explains: “While this is a high-quality station for a world-class railway service, the project is also very much about place- making and regeneration.”

“Both Bexley and Greenwich authorities have been working closely with Crossrail to rejuvenate the immediate urban realm around the station. Indeed, we see the station creating a much-needed area of civic and community focus, providing a distinctive sense of ‘place’ for Abbey Wood.”

By 2026 an estimated 10,000 people will be making journeys to and from Abbey Wood each day with another 10,000 using it as an interchange, a train calling every five minutes at busy times.

“Essentially the station has been designed to fit within the local context, around the new track layout and footfall projections,” says Kroes. “The organic roof shape has been designed around these passenger circulation areas and influenced by surrounding buildings and external lines of sight.

“While we’ve deliberately developed an exterior design that has a civic feel, we didn’t want a big boxy shape that has a negative impact on adjacent buildings, blocking out light and sight lines. So, it’s quite a low building and, in an area with significant plans for high-rise all around, that means the view down onto the station assumes greater importance.”

He adds: “The standing-seam, zinc roof continues over the edges of the building, wrapping round the soffits and the project- ing canopies over the main entrance and the stairs. Looking down, some rather interesting patterns are created by the standing seams thanks to the complex geometry.”

A limited number of fritted glass skylights provide daylight penetration while limiting solar gain, with additional daylight coming in from the east-facing main entrance via a varying height planar-glazed elevation of transparent and opaque white glazing.

Timber has strong presence throughout. Standing inside, the dominant, highly visible design feature is the wooden roof beams made from larch glulam, which is an attractive structural timber.

Kroes says: “We used glulam because people can relate to the craftsmanship involved and it works well with the material pallet of concrete, glass, zinc and brick. Furthermore there is little greenery or trees in the immediate area, so the timber beams bring in a strong natural element to the building. The beams run from the entrance right the way to the platform stairways, effectively drawing people from outside the station and guiding them through the building.”

Sitting on concrete pile foundations, the structure is largely a concrete frame up to the upper level, where the public areas are steel-framed. Large parts of the external sides of the building are clad with Frake, a thermally modified, highly fire-retardant hardwood, creating an interesting curtain-like effect and complementing the timber roof structure. Elsewhere a combination of real bricks and brick cladding completes the exterior finish. The interior of the building and concourse have a flamed granite paving.

The two lift portals on the forecourt, linking it to the street 24 hours a day, are distinctly rectangular in contrast to the overall design. Kroes explains: “The shapes act as way-finding totems – curved roofs might imply these lifts only take you to
the station.”

Way-finding was a major issue with the former station, but the designers are confident people arriving will clearly see where they need to go.

Liz Payne, line-wide integration architect for Crossrail, says: “The forecourt is ultimately designed for circulation between the station, bus stops and streets but we expect it to become a meeting point, so the urban realm design includes seating and it could accommodate pop-up stalls, too.”

Payne points out there will be easier and clearer access to more bus services from the new bridge-level bus stops, which have been designed by Fereday Pollard to reflect the station architecture.

Liz adds: “The footbridge walls, escalators and stairs are glazed to give passengers good visibility across the facility, offering a greater sense of security and safety.”

In terms of sustainability the station is designed to BREEAM and CEEQUAL accreditations. The zinc roof finish, for instance, is expected to last over 90 years, far exceeding most roofing finishes.

Natural ventilation is used in both ticket halls but mechanical ventilation is required to support plant and electronic equipment including within the Crossrail signalling building located west of the car park. LED lighting is used throughout the station and a greater proportion of passengers are expected to access the station via the improved public transport links.

Kroes concludes: “Railway stations present many technical problems for architects and a good design is one which evolves out of resolving these issues.

“The success of Abbey Wood, aesthetically, operationally and as a civic asset, is a combination of thoughtful design and a desire to deliver quality from everyone involved. 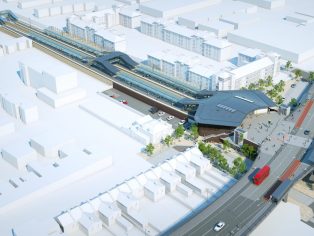 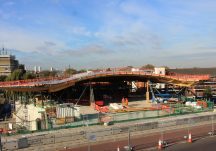