In September 2014, 46 athletes from Special Olympics Ireland competed in the European Summer Games in Belgium, across seven sports representing all five regions of the Emerald Isle.

On the 21st of September the Irish Team returned home to a hero’s welcome as they had scooped 57 medals (the Aquatics Team alone winning one gold, five silver and two bronze) and thirty placement ribbons, as well as many personal bests.

These incredible athletes experienced amazing success in their sporting endeavours, representing their clubs and counties to the highest level. And international flooring and interiors specialist Gerflor had a presence in this success too.

Odran Cafferkey a Sales and Specification Executive with Gerflor has had involvement with the Irish Special Olympic team from the early days. His daughter Niamh was born with Down’s syndrome, so a move towards the Special Olympics Team was a natural choice.

Gerflor were delighted to be able to support Odran by allocating him a number of day’s special leave alongside his own holidays in order to facilitate his involvement with the Aquatics Team, enabling him to be fully supportive of this community event. 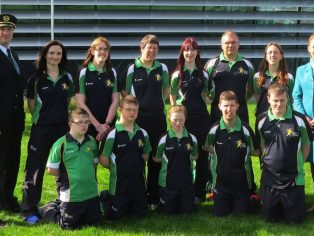