Today’s co-working spaces need to be vibrant and engaging if they are to attract dynamic young businesses, and in that context the newly opened Huckletree West doesn’t disappoint, reports Ray Philpott.

White City, the former heart of the BBC’s empire in the capital, is being transformed into a vibrant new residential and commercial quarter in west London.

At the centre of this rebirth is the new White City Place business district, consisting of six repurposed buildings located on the national broadcaster’s former 17 acre Media Village.

As part of a wider redevelopment of former BBC properties in West London it is being marketed by the developers Stanhope to attract start-ups and entrepreneurs in the tech, media and creative sectors to create a dynamic new business hub.

It opened Huckletree West, its third co-working space to date, on the ground floor of the refurbished six-storey BBC Media Centre originally completed in 2004. Now renamed MediaWorks, it’s one of three buildings in White City Place, which have been designated for extensive redevelopment.

The internal architecture and interior design is the work of Studio RHE, commissioned to create a distinctive, striking, and ‘open’ co-working layout.

The building overlooks attractive, accessible terraced gardens to its rear, and adjoins a series of street level retail outlets located to the front and one side of the building.

Studio RHE was keen to build on the successful work it had carried out on the Huckletree’s earlier centres at Shoreditch and Finsbury Square in London. However at White City, the architects faced an altogether different challenge to successfully capture the distinctive Huckletree customer experience.

The earlier projects were contained within older, established buildings, benefitting from an existing language and fabric that can be interacted with. By contrast, Huckletree West sits inside a Category A core and shell refurbishment executed by the building’s original architects, Allies and Morrison.

So, how do you turn a capacious, double-height, ground floor ‘box’ with zero identity into a series of highly original, inspirational, clearly defined yet interconnected work spaces for a ‘community’ of more than 500 people?

An additional constraint is that Huckletree’s space is effectively bisected by a central atrium, lit by roof glazing six floors up and housing the building’s main entrance, reception and lobby.

Richard Hywel Evans, director and founder of Shoreditch-based Studio RHE says: “Primarily we wanted to capture the dynamism and vibrant atmosphere of Huckletree’s first two locations, having spent three years developing the concept with them.

“We have a fantastic working relationship with Huckletree based on continual feedback and open dialogue.
So we’re able to share our thoughts as we go and be flexible, which is useful when we adapt spaces to meet unforeseen or changing needs.

“Together, we’ve drawn on a mix
of intuitive ‘gut feel’ about what worked well at the earlier sites, combined with solid analytics to see which elements were actually the most used or occupied.”

In White City though, they inherited
a blank canvas – a vast space with a glazing curtain wall more than five metres high around most of the perimeter sitting at the bottom of a concrete framed building. The only structural feature they added was a mezzanine in the larger of the two co-working spaces, increasing floor space by a third.

As Hywel Evans explains, “The big question we asked ourselves at the start was how do we give this huge space an identity, how do we create an idiosyncratic place that‘s interesting to work in and characterful without looking mannered or over-designed.

He continues: “We needed to meet the key Huckletree criteria of creating a vibrant community through visual transparency and connectivity across different areas. The core working areas are in the centre, with lots of breakout areas to engender interaction and spaces where Huckletree members can get privacy if they want. This meant creating insertions of different, distinctive areas, each telling a different story.”

One striking example of such an insertion is the meditation garden, an internal circular structure made from recycled shipping rope containing circular seating where tech devices like phones are banned, and the recreation room with walls made from natural, woven willow walls.

Another intriguing element is what Hywel Evans calls the “Hutte”. It is a large house-shaped building of birch-faced timber resembling a Swedish cottage, containing meeting rooms and the centre’s Virtual Reality (VR) Laboratory, where members can learn and explore uses of immersive technologies.

In one corner there is the auditorium, a 150-seat plywood terrace with stage lighting looking down on a space for internal or external events, presentations or larger meetings. “It’s open to the general space surrounding it,” says Evans, “but huge green curtains with a moss-like texture can be pulled across to close it off for privacy if required and we’ve used the space in the undercroft of the seating as an alternative meeting place.”

The green theme continues with The Slope, an angular yet comfortable area for relaxation and casual meetings, again finished in a moss-like green fabric, internal planting features and a lovely view over the gardens.

Other interesting features designed for the maximum benefit of co-workers include sealed booths for one-to-one phone or internet-based conversations along with larger teleconferencing spaces – both offering privacy for participants and protecting other co-workers from noise.

Towards the centre of the space is the core working area where hot desks and desks dedicated to a particular company or individual are located. On the periphery are variously-sized, glass-fronted private offices or ‘studios’ along with bookable meeting rooms with their own individual colour and design.

“The enclosed areas serve to delineate the space along with the walkways that have been finished in a range of different finishes and colours,” says Hywel Evans.

Project architect Thidaa Roberts explains the benefits of a mezzanine level in such a building, saying it “has proven a highly popular area with users”.

She continues: “We elected not to stretch the mezzanine right across the office space as we thought it would damage the aesthetics and create a loss of connection in the working environment.

“It is actually a steel platform structure, such as that which you might see in a logistics warehouse, with structural bolts and rivets on display providing a certain level of ‘industrial chic’ while keeping to the budget. Metal guard and stair rails combine with fine mesh balustrades to provide transparency of view.”

Transparency also plays a critical role in addressing the challenge of having the two main work spaces situated on either side of the atrium/lobby. As Roberts points out: “Thanks to the double-height glass, people in both elements can see directly into the other space, retaining the strong sense of visual connection inherent to the brand.

“In fact,” continues the architect, “we really celebrate the glazed curtain wall throughout, exploiting the natural light on both levels and placing communal places near the glass so people can enjoy the gardens and views outside.”

Elsewhere, the building’s original circular support columns, complete with attractive exposed concrete and finished with black and white stripes subtly added at the top, are a strong feature.

And to bring interest to what is an otherwise uniform perforated metal-clad ceiling, the architects have peeled the tiles away in certain areas to expose strips of bare concrete, which have been painted black to reflect Huckletree’s signature diagonal stripe branding.

Floor surfaces include vinyl and carpet in a range of colours for high traffic areas along with polished concrete of the original floor, and again are used to demarcate areas and create interest.

Different styles of lighting have been exploited to differentiate areas. Long, tubular metal-capped lights resembling giant electrical fuses are suspended verti- cally, horizontally or even across each other to seemingly tumble through the air, while long rectangular downlights feature heavily elsewhere.

Lighting also adds drama to a striking acoustic sculpture in the shape of a huge cloud hovering above the main desk area. Made from many fluffy hand-made pom-poms hung from the ceiling at various heights, it is uplit by diagonal lights suspended beneath giving it an attractive glowing appearance.

Surprisingly, the services are not on display, as is the case with so many modern buildings, and are largely accommodated in the large void underneath the ground floor.

Latest reports show the building is proving popular with co-workers, and Studio RHE itself has voted with its feet, renting a four person office to serve as a base for a special modular housing concept it’s developing.

Summing up the project, Hywel Evans says: “Businesses want to be in here and we love being in here. That’s a real testament to the trust between our client and ourselves that enabled us to develop this space together, ultimately creating a visually rich, stimulating environment to work in.” 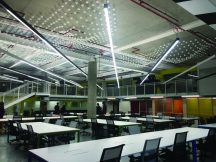 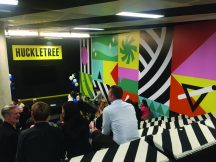 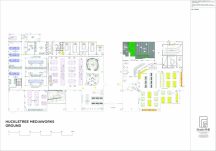