A case of presentation – The Royal Mint Experience, Llantrisant

Rio Architects has brought some creative sparkle to its design for a visitor centre near Cardiff which shines a light on the work of The Royal Mint. Ray Philpott investigates

For many centuries The Royal Mint has been producing coins that are part of everyday life in this country and abroad. Yet, while its name is familiar, knowledge of The Royal Mint’s essential role in the nation’s development and economy has until recently remained the province of the body’s employees and various academics and historians.

Now, however, it is proactively encouraging people to find out more about its history and its current operations in this new building in Llantrisant, south Wales. Opened this summer, The Royal Mint Experience includes a tour of the money-manufacturing factory and a sophisticated interactive exhibition area within the Rio Architects-designed building. Boasting bold, smart installations with artistic lighting and interactive audio-visual technology, the exhibition area gives visitors the chance to discover the role of this great British institution in an interesting and engaging way.

When it came to the design, The Royal Mint wanted an attractive, inspiring single story building, making a bold visual statement externally and offering a stimulating experience internally – and one that could be built quickly. For Cardiff and London-based Rio Architects this meant undertaking considerable background research in order to gain an in-depth understanding of exactly what The Royal Mint does. A diligent approach that saw it win a limited competition in 2012. The basic concept behind Rio’s solution was to create an envelope that is essentially a giant, shimmering ‘gift box’ containing treasure – the history and essence of The Royal Mint – within.

Inside, the multi-million pound rectangular, largely metal-clad building features a variable-height entrance and reception area that literally sparkles with light, leading off to the exhibition tour and gift shop, a 60-seat cafe with external courtyard, educational facilities and offices.

Like many striking buildings, The Royal Mint Experience seems effortlessly straightforward, bold and readable to the onlooker, but as founding director Richard Roberts says, “the devil is always in the detail.”

He explains: “As part of our intensive research we carefully considered all the manufacturing processes. We saw how they make the dies, how the engravers work and the way the designers work the metals. “It struck us that they make these fantastic creations and put them in highly attractive presentation boxes and that gave us the idea for the gift box concept. The challenge was creating a striking and attractive envelope that reflects the essence of what goes on inside.”

While touring the production process, the team witnessed the copper and silver blanks cascading off a conveyor. Roberts says: “We were struck by how the coin blanks seemed to project individual colours creating a dazzling array of different effects, depending on how they caught the light. We were determined to somehow capture the essence of that process on the envelope of the building.” Their design concept was to clad the building in an iridescent, tessellated pattern comprising identical irregular hexagons.

After exploring a multitude of different options for cladding material, the architects chose Rimex, a specially treated colourtinted stainless steel with reflective properties. Rigorous trials carried out by the design team led to the selection of four differently coloured and textured panels to be applied in a random-pattern.

Architect Irene Suarez-Jimenez takes up the story. “Our cladding concept is essentially an abstracted reflection of the coins minted at the factory that captures the changing hues associated with cascading coins, so the choice of material was extremely important. “Rimex is an amazing product that constantly changes its appearance under different lighting and atmospheric conditions and even the angle it’s viewed from. It complemented our vision for the facade perfectly.” Given the complexity of the patterning, the team employed Revit BIM software to 3D model the design. Nevertheless, randomising the position of each panel within the facade to generate an abstract appearance of a ‘pocket full of change’ took hours of careful deliberation.

Gareth James, the project’s architectural technologist, says: “It was challenging to detail, but Revit enabled us to transfer our concept into accurate 3D models, to visualise the scheme for the designers and stakeholders in a recognisable format, and co-ordinate all the relevant building elements.” James adds: “Each panel had to be positioned extremely accurately, which brought its own challenges, given the important interfaces with other building elements and the fact that the pattern had to wrap around corners and across doors.”

The team worked closely with the cladding specialists Richardson Roofing, who skilfully installed the design, getting corner and entrance panels pre-shaped at the factory and carefully fixing each panel to the metal sub-frame, ensuring a 10 mm tolerance gap. The flat-roofed structure sits on pad foundations with a steel frame behind a pre-cast concrete plinth, while the cladding is mounted on metal-faced composite cladding panels with the bottom rows of plates skirting over the top of the precast plinth.

Moving inside, the facade pattern is carried through into a different material at the recessed entrance, forming an abstract version of the pattern on the stone-clad walls of the reception and circulation area. Roberts says: “The entrance draws you in because the soffit slopes down and the walls narrow as you move towards the main doors. Once through, the soffit and walls open up again into the central spine – the gathering space.

“There, circular rooflights deliver pools of daylight producing interesting dappledlight effects, while randomly positioned and sized coloured LED lights accentuate this main circulation spine.” As you progress towards the middle of the spine the ceiling falls and the walls narrow again, channelling people towards the exhibition area. Alternatively, visitors can choose to access the cafe and educational spaces which open up directly off the spine. At the far end, the spine expands once more to create a large area for accessing the tour beyond. Here and there, seemingly random single and small clusters of hexagonally shaped windows punch through the facade allowing in pockets of natural light.

However, the exhibition area is mostly dark with accentuating artificial mood lighting to enhance the displays, created by exhibition specialist Mather & Co. “Mather’s design needed to work hand in glove with our architectural concept so there was a considerable amount of interface between us. The result speaks for itself – the exhibition compliments the building exceptionally well,” adds Roberts. The single-storey building is actually double-height with a dropped internal plant well. This permits services and plant to be located out of sight, giving the building its clean profile.

This recess also ‘hides’ a photovoltaic array, which is one of the building’s sustainable features. “Although mechanical ventilation and underfloor heating have been used, the building’s efficient footprint, super insulated facade, minimal glazing to limit solar gain and the introduction of opening clerestory windows for natural ventilation to the cafe and education rooms have all been employed to minimise the building’s reliance on exhaustible energy.”

Looking from outside, the building’s cafe features a floor to ceiling glazed frontage which opens up onto an external courtyard paved with hexagonal granite sets. The external landscaping of the venue needed some considerable thought as The Royal Mint wanted the building to be seen by passing traffic using the adjacent road, with visitor car parking situated in the former grounds of a derelict farmhouse.

Roberts says: “You approach over a footbridge that cuts into woodland through which the Nant Muchudd River flows and the facility is slowly revealed.You find yourself on an enclosed piazza bounded by a natural ‘pennant’ sandstone wall topped with security fencing which creates the effect of being cocooned in a separate area.

For fairly obvious reasons, The Royal Mint is a highly secure operation and one potentially complicating factor in the construction of this building was that it forms an integral part of the mint’s secure perimeter; once a visitor is through the entrance doors, they are in The Royal Mint itself. “In fact,” explains Roberts, “we’ve slotted the building into a section of the secure perimeter, so it’s partly on the ‘airside’ of the business.”

“However, through close liaison with The Royal Mint’s security team from the outset the building was constructed with little effect on The Royal Mint’s everyday business. Detailed construction phasing limited the numbers needing to go air-side and the few who did went through full security checks.”

Probably the toughest challenge for the architects has been successfully translating their original design concept into reality. Roberts comments: “It’s fine creating an interesting concept, but you have to make it work. In this case a lot of hard work and research by the whole project team has resulted in a building that both we and our clients are proud of.” 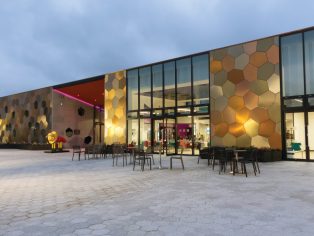