A breath of fresh air in new airport terminal

How do you ensure a fresh, comfortable environment in an internal space the size of 11 football pitches, which can accommodate the transfer of  up to 55million people a year? You turn to the locally-based, national experts in air movement.

“It’s been a challenge. We had to balance appropriate fresh air into, and exhaust air out of an open plan 52,000m² space. We had to address the needs of the airport staff, who remain comparatively static and the transience of thousands of passengers who will use the terminal every day. We needed to bear in mind the different ventilation needs of retail spaces, baggage handling, offices, toilets, and passenger transit areas (arrivals, departures, immigration).The huge span of glass façade could be a source for solar heat gain, plus the varying heat levels internally depending on occupancy numbers added further considerations, regardless of the CIBSE air passenger hub recommendations regarding optimal warmth and relative humidity.”

The choice of grilles and diffusers was influenced not only by the ventilation requirements but the specific aesthetics and security considerations too.

Gilberts had to modify its DGA4 louvred face diffusers to accommodate the consistent aesthetic appearance demanded while removing any potential for concealment behind the units in the Border Force areas. This was also achieved by working closely with the ceiling manufacturer to enable all ceiling mounted grilles to be flush mounted for a seamless and fully integrated appearance.

The majority of Gilberts’ diffusers in the main passenger areas are its GSFA and GSJA swirl diffusers, whose radial vanes provide the rotating air distribution effect required to introduce high volumes of air with rapid entrainment and intermixing, without cold spots and draughts. These are complimented by DGC4 louvre faced ceiling diffusers for a clean horizontal air distribution in the public spaces, and GX extract valves to remove stale air from washrooms and toilets.

Gilberts’ in-house design and manufacturing capability was an influencing factor in its choice as supplier by Crown House Technologies, the building services provider to the design & build contractor Laing O’Rourke.

“The T2 ‘super terminal’ extension is designed to establish the Airport as a world class facility, the UK’s global gateway to the North. In such a complex building, there was a number of logistical challenges. Gilberts’ in-house design capability meant the company could develop bespoke solutions where required. Its in-house manufacturing meant we were assured it could deliver the whole package, despite the scale and complexity of the order.”

Gilberts’ expertise spans almost six decades; today it is the leading independent authority, with members of its team being sector experts, speakers, and educators across leading industry bodies. The company is fully open for business at its 8825m² head office and factory, where it has just commissioned new, state-of-the-art CNC production machinery, and expanded various production facilities to further enhance its customer offering in quality, value and service.

For more information visit Gilberts website, email info(Replace this parenthesis with the @ sign)gilbertsblackpool.com or call 01253766911. 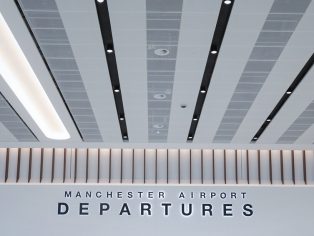