On the outskirts of Birmingham, the BBC’s long-defunct Pebble Mill Studios site in Birmingham is being transformed into a life sciences and healthcare campus.

At its heart is the new £50m Birmingham Dental Hospital and School of Dentistry, a state-of-the-art teaching and clinical facility, which enhances Birmingham’s reputation as a hub for medicine and science.

Designed by Worcester-based One Creative Environments, the hospital in Edgbaston is the first of a number of potential healthcare facilities being constructed on the 27-acre former studio site and forms part of a vast network of organisations, surgeries, medical facilities and hospitals  in the area known as the Edgbaston Medical Quarter.

The new facility replaces the current 1960s dental hospital in the city centre and will host more than 600 undergraduate, postgraduate students and trainees each academic year.

It comprises a long, rectangular south wing, which is home to a range of services for the public and a y-shaped north wing providing world-class research facilities and a modern learning environment.

These four-storey, concrete-framed constructions are linked by a steel-framed atrium and central reception area at ground floor, with entrances on two levels. The steel-framed top floor of both blocks contains the plant.

Dental chairs and surgeries are located in the south block while the north block has dedicated teaching rooms, a library, flexible learning zones, laboratories and research facilities. The design takes into account the heavy servicing required for these facilities and the benefits of placing laboratories near plant areas.

Although a seemingly straightforward concept on plan, the end product is the result of a carefully thought out and clever design. Working to a tight budget, it’s been skilfully evolved to meet the complex requirements of the medical practitioners, teaching staff, students and key stakeholders within the hospital’s many clinical departments.

Meeting complex needs
Plans to relocate the old dental hospital had been ongoing for some time when One became involved in 2010. One was commissioned to undertake a feasibility study to analyse various development sites, with Pebble Mill emerging as the front-runner. Consultations followed and after gaining detailed planning consent in 2012, construction began in 2013.

The landmark development has been led by Birmingham Community Healthcare NHS Trust, together with its partners the University of Birmingham, Birmingham and Solihull LIFT (BaS LIFT), Prime plc, Galliford Try, Calthorpe Estates and One.

“We had a year of weekly consultations and meetings with a large and diverse array of stakeholders and user groups. The facility needed to be located near the University campus with good transport links. Inside, ease of wayfinding was high on the agenda, as was clear division between teaching spaces and clinical spaces and the need for each dental clinic to have easy access to the imaging department.”

“Ultimately, the interior layout is actually relatively simple, but getting there has been anything but. We had to ensure all departments are proportionately sized and in the right position, so patients – who are often anxious and in pain – can move through the building with the minimum of stress. When people arrive they need to intuitively know where they are going.”

Being responsible for the interior design as well as the architecture brought its own advantages in this aspect for One, which worked with users to develop a wayfinding strategy.

“The design of the atrium, the central hub of the building, is critical,” says Tebbatt. “Every department is quickly and easily reached from there and each has its own reception and sub-waiting area. The waiting areas are on the balconies of the building so they can be seen more clearly, and found intuitively.

“To make interior navigation easy our interior designers selected a fairly neutral pallet in general but used striking colours for the wayfinding, so visitors and patients know to follow specific colours to get to their destination.”

Embossed cladding
The building is clad in attractive metal sheets, many of which are embossed with a design based on a microscopic view of dentine inside the tooth, called odontoblasts.

“If you’re a dental student it’s instantly recognisable and if you’re a patient or visitor it’s a nice pattern that flows into the building. We wanted a design that wouldn’t date and something that had depth behind it and the microscopic tooth pattern embodies what the hospital and the whole organisation is all about.”

The Trimo Qbiss One panels are made from pressed, sheet-rolled steel. Some are powder-coated while others feature a special metallic finish and are used across the building apart from the plant areas. Each one is purpose-built and pressed in a factory using a secret process to create a seamless panel that is able to have pattern imprinted on it, using Qbiss Artme panels. Every panel was made for a specific location on the building.

The precision panels are mounted to the concrete frame with just 1 mm tolerance. Bespoke flashing around windows and corners is used to manage the differences in tolerances between the cladding and concrete.

“The cladding adds a real crispness and sharpness to the building. The panels provide an almost perfect 90 degrees crease on the corner without a visible joint, making the building look clean and well defined.”

While the atrium is equivalent to nine stories high, making it nearly as tall as the demolished 10-storey studio block, it contains just four 5 m-high levels. Three steel bridges link the north and south blocks across the upper floors at each level – two for staff and students to use and one is reserved for transporting clean and dirty goods and equipment. On the ground floor a corridor behind a glass screen enables the movement of clean equipment and supplies and items requiring sterilisation or disposal without passing through public areas, separating ‘back of house’ functions from the front of house activities.

The significant height between the atrium floors, and the installation of glass balustrades throughout the atrium, has enabled the architects to maximise natural light, a design feature found throughout the building.

“It’s essential for dentistry, where accurate colour matching of teeth and dental materials is extremely important. Artificial light can impact on how the eye perceives colour, making natural light crucial to some of the functions.”

For this reason, 3.6 m-high glass window units have been fitted in many locations throughout the hospital.

“We’ve utilised direct natural light wherever it is critical and where possible,  a lot of careful design went into the window units to enable maximum light penetration of deep spaces,” says Whittall. “Inevitably though, there are some internal rooms and spaces where we’ve had to exploit borrowed light, too, through glass walls and panels. We’ve kept the need for artificial lighting to a minimum.”

In the dental school most of the clinics are open-bay containing around 20 chairs each, and offer views across the whole clinic for teaching and assessing students.

“A combination of mechanical fans and opening windows circulate the air. Windows run up to the structural soffits, featuring openable vents for night time cooling,” says Whittall. “The atrium is key to the building’s low-energy design. Utilising stack ventilation it draws warm air out of the wings which is collected at the top and heat is extracted and recirculated. When the windows are open the mechanical systems shut off so they’re not competing against each other.”

The glazing incorporates interstitial film to reflect UV but allow light through, while the top-lights of the window units feature solar shading to help reduce internal heat build-up, and the bottom opens to enable local environmental control and passive cooling and purging at night.

The soffits comprise exposed concrete slabs absorbing warm air during the day and cool air overnight, and the walls and curtain walling have a high degree of air-tightness so that air flow can be accurately controlled. As well as the usual solar PVs on the roof, the building also boasts presence and absence control on lighting.

These features have contributed to achieving a BREEAM ‘Excellent’ rating at the design stage, which is a prerequisite for all new NHS buildings.

‘A healing place’
Much of the car parking is provided out of sight at undercroft level with attractive upward sloping landscaping leading up to the ‘woodland walk’ running alongside Bourne Brook.

One also designed the external landscaping, creating a planting scheme involving wild meadow grasses to preserve biodiversity, linking into the overall landscape masterplan scheme for the Pebble Mill site. This did not have to be extensive as the building benefits from views of the attractive, mature landscaping dating back to the studio era that lies on edge of the grounds.

“The building is in a beautiful setting in leafy Edgbaston, and enjoys views of both nature and the city skyline. It’s a lovely spot to work in, and the surroundings combined with the design of the building make this a healing place that helps to put patients at ease.” 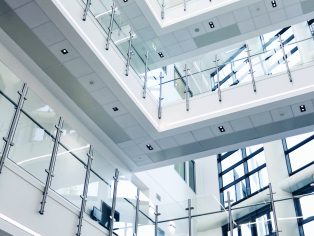 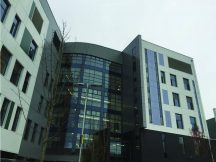