Glazing by Kawneer features on a sustainable benchmark building.

It was specified by architects Frank Shaw Associates, who have specified Kawneer systems on commercial and industrial projects for the past 20 years.

“Kawneer products represent a good balance of performance and cost. The curtain walling was used to form all the glazed part of the external wall.”

“Curtain walling was chosen for its simplicity, flexibility and air tightness, and aluminium’s sustainability was important in securing BREEAM credits.”

Frank Shaw Associates detailed the building to allow a very simple interface with the construction of the external envelope generally. The typical interface detail comprised a DPC dressed into the curtain walling, with a packing piece glazed in and perimeter mastic sealant applied.

They used two curtain walling face cap profiles to allow the transoms to have greater definition than the mullions.

“The glazing was integral to achieving the desired aesthetic.”

As well as the BREEAM “Excellent” rating, the building achieved an EPC rating of A. It comprises the two three-storey wings separated by atria and core, aligned to maximise the effectiveness of both passive solar shading via brise soleil and the LZC (Low or Zero Carbon) equipment (photovoltaic panels and solar hot water).

Built of traditional construction, using an in-situ concrete frame with post-tensioned concrete slabs, it was built on a four-acre site by Kier Construction (Central) for client developer Goodman, with the Kawneer elements installed by Aluminium Sashes.

The 81,000 sq. ft building features formal and informal meeting and conference facilities, an on-site restaurant with dining for around 200 people, training rooms and an innovation centre showcasing new green technology.

British Gas employees moved to the new building from three existing offices on the park while senior personnel also relocated from their current headquarters in Staines, Middlesex. 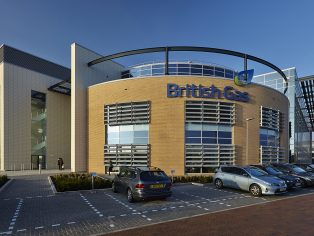