Wales is facing a major shortfall in new homes over the next five years, according to a new report published by Cardiff planning consultancy Turley Associates.

The report, Wales Housing Land Supply Update, examines housing requirements and land supply across the country and shows that Wales will need 57,313 new homes over the next five years to meet current demand. The report shows that based on current local authority estimates of land supply just 50,730 new homes are expected to be built, leaving a significant shortfall of 6,583 homes.

“Local authorities are required under the national planning policy to be able to demonstrate enough land to support house building targets over a five year period. Our research and report shows that just 14 of the 25 local authorities in Wales meet this requirement, with all other areas facing significant housing shortfalls.”

“The shortfall is, however, likely to be much higher. Local authorities in Wales calculate housing numbers in two different ways, with one based on past build rates which in the current market tend to down-play housing demand. Thirteen local authorities use this build rate method and actual housing demand in many of those areas is likely to be higher than reported, meaning a significantly larger shortfall.”

The research follows closely the publication of Cardiff Council’s working draft Local Development Plan (LDP) that will direct development until 2026. Cardiff Council estimates that it will need 41,100 new homes over that period, with some 14,000 new homes to be built on greenfield land. Cardiff’s draft LDP will be open for consultation in the autumn and is expected to be in place by October 2015.

“Demand for housing in the Wales and particularly Cardiff remains high. Local authorities are required in law to be able to demonstrate at least a five year land supply for new homes and where they cannot leave themselves open to development by appeal. Cardiff Council is rightly looking to make some difficult decisions with regards greenfield land, but must also address its immediate housing shortfall. It cannot wait until its LDP is adopted.”

“Wales Housing Land Supply Update is a snapshot of housing need and land supply as of May 2013. Permissions for new developments continue to be granted, meaning that these numbers will change. That there is a shortfall, however, will remain.” 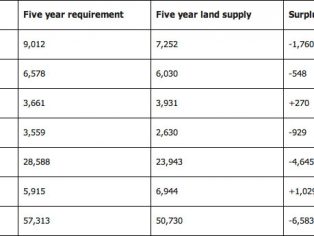