The Society of American Registered Architects (SARA) was founded in 1956. SARA has 11 councils in 8 states, including the New York Council. With the motto ‘Architect Helping Architect’, SARA enables all those involved in architecture to share information and ideas.

There is a powerful urban dynamic between the streets of New York and the High Line, a layered civic realm that has developed over generations and in many iterations. The design of 520 West 28th Street conveys this history and contextual relationship.

The split levels of 520 West 28th Street provide varied living spaces and echo the multiple layers of public space on 28th Street and the High Line.

These split levels are expressed within the interlocking chevrons of 520 West 28th Street’s hand-crafted steel façade which carries the spirit of Chelsea’s industrial past; its detailed workmanship continues the rich tradition within New York’s historic architecture of enhancing the public realm.

This commitment to upholding the distinctive character of the neighbourhood has created a building with its own architectural presence, yet is very much of its surroundings.

Other 2017 awards given by the Society of American Registered Architects, New York Council include 187 Franklin Street by System Architects and the Roy and Diana Vagelos Education Center by Diller Scofidio + Renfro Architects/Gensler.

This recognition by SARA NY follows 520 West 28th Street being voted ‘Building of the Year’ in the poll to select New York City’s best architecture by 6sqft.com. 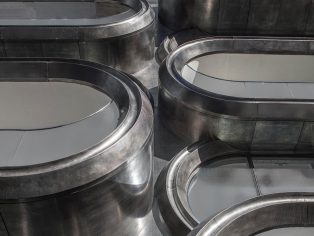