World-renowned artists, architects and designers have taken part in the 10×10 Drawing the City London, helping to raise funds for the UK’s leading architectural and construction aid charity, Article 25.

A section of London was divided into a 10×10 grid with each of the 100 squares allocated to a prominent architect, designer or an artist. Using any medium available, they created 100 pieces of art, capturing the unique, the extra-ordinary, the unnoticed and the ever changing city of London.

The artwork created is due to go on display to the public from 21 to 28 November at 1 Granary Square, London, N1C 4AA. Visitors will then have the opportunity to bid for selected pieces by attending a special charity live auction event on the 28 November. Preliminary bids can also be made online by visiting www.10x10london.com/category/auction/2013

“Boris bikes have become part of the London landscape since their introduction in 2010 with over 8000 now wheeling around the City’s streets and parks. In my square the docking station was full of bikes, all standing to attention, all ready for action, the only difference from one to the next being the heights of the saddles. But what if they were all different colours? What if London went Cycledelic?!”

“I am on a mission; to look down on this year’s 10×10 grid from Barratt’s Dalston Square. They are sponsoring the event for Article 25 and doing this drawing binds their regeneration work around town into the personal views of myself and 99 others across the grid; coming together to make a ‘collective snapshot’ of the city; a moment in time. It is a good view from the tallest tower. The deep cut of the railway leads the eye South, just beginning to veer East as the City rises. Trains move like toys and the bridge seems to hover over the cutting. It is a brown grey patchwork but one red light and one yellow for sale sign shine out. Green tree cushions billow like clouds amongst the blocks of De Beauvoir Town; rising like froth towards the wooded horizon far away.”

“Most people see Nicholas Hawkmoor’s beautiful Christ Church from the axis down the centre of Brushfield Street. This is a striking vantage point, but is somehow distracted by all the noise and activity from Commercial Street. While doing research in the area, I came across this amazing view from an old weaver’s loft in Wilke’s Street (credit to the Gentle Author). This inspired the drawing that captures a quieter and more humble view of this great building.”

Chris Choa studied drawing and printmaking at Yale. An architect and urban planner, he loves cities and leads the urban development studio for AECOM.

“Whilst walking around Finsbury Circus you are struck by the huge geometrical statement of the space – at 2.2 Hectares it is the largest open space in the City. The Green in the middle of the circus is occupied by the magnificent Lime trees and the huge Crossrail excavation and associated plant, the scale of which serves to limit your view of the entire Circus in one view. What has interested me particularly about the buildings that occupy the circus is the approach to ornament which alters your perceptions about the scale of the space as you walk around the circus.”

“Tucked into the new lies the forgotten city. Hidden between cracks in the window and gaps in the pavement live traces of what has been. The storeroom of shops with their back to the world facing into a hidden interior, or the corners of a warehouse where a cardboard box has been propped and left for a generation to fade in the London sun. These emblems of Old street are transitory icons of the poetic city, the left over and unintended sitting beside the carefully conceived. In my work for this year 10 x 10 I have made a Painting from the street looking into a forgotten interior. It is close-up shallow space, subtle colour, and geometric”

James Cheshire and Ollie O’Brien (James and Ollie) created the Mapping London blog in 2011 after being inspired by the many innovative and eye-catching maps of the capital. Their image provides analysis of the entire 10×10 area, with data taken from the 2011 census, showing university education, health, amount of people in the technology workforce and much more.

“This southern extremity of Hackney changed its face completely as a result of the second world war and reconstruction in the 1950’s to 1970’s. It now retains its own character, and the flats and houses have scale, footprint, pattern and detail quite separate and different from both its own past and the nearby design and commercial centre of Shoreditch. This watercolour painting picks out some of that pattern, colour and material, some of it diffused by frosted glass balconies, and that of buildings opposite reflected in its large windows”.

“Having wandered around the estate for several hours in search of inspiration on a particularly grey September Saturday, Fairchild House appeared in all its red brick bulkiness, displaying the elaborate treatment of its Northern elevation. It was this architectural game where the access deck oscillates between opening out and closing in that captured my attention and inspired me to create this composition. With a random selection of curved balcony details I have attempted to reveal the abstract essence of the building.”

“I couldn’t resist peering out of my allotted square towards Christ Church in Spitalfields. The view today with its public art and mature trees is far removed from the narrow vista that was swept away with late 19th century slum clearance and a building denigrated as recently as 50 years ago is now considered a masterpiece of the Baroque. How history changes! Having worked on a project across the street I’ve been mesmerised by Hawksmoor’s tour de force and wondered if a few sketches (in the autumn drizzle) could touch on the secret of its physical presence.”

“I have tried to capture Brick Lane, full of colour and life: the restaurants and food stalls, multiple signs, adhoc street music, tempting smells, the bustle of people. As well as acrylic paint and black ink, the painting incorporates a collage of discarded menus, bags, cutlery, tickets, labels, the cover and extracts from Monica Ali’s book “Brick Lane”, and remnants of a palette knife which broke whilst creating the painting, and the blade used to create the painting – included to represent the sharp edginess of the place.”

“I knew straight away that this would be the subject of the drawing. A study of surface on the Victorian arches where the club Rows murals travel out onto Bethnal Green road. Layers build up on the city’s fabric and as one artwork fades another overlaps. This was an opportunity to capture a fleeting moment in the city’s changing landscape.”

“Exchange House, designed by SOM, which spans the railway tracks coming out of Liverpool Street station is one of the city’s most dynamic pieces of architecture. The grand arch which springs from granite plinths at either end of the building signals its bridge-like function. The Square is host to regular events and the drawing shows a game of croquet in progress, watched by a lunchtime audience of local workers and, to the left, Stuart Lipton who was responsible for the original development. The drawing attempts to reflect the dynamic nature of the building and the public space it encloses.”

“Architects see the world in patterns, lines and relationships. I wanted to paint a version of what I see- rather than what a camera sees. What appears in the daytime as symmetrical buildings, at night light up to reveal asymmetrical window patterns. The brick disappears and layers of facades overlap themselves. Modern East London is defined by skyscrapers, industrial buildings and Victorian remnants. My square, just north of Old Street, is the perfect pairing of multiple eras fused together. The character and richness that the area brings are drawn together by these lines and patterns along a surreal four-point perspective.”

In pen and full colour water and spirit markers. “Brick Lane has a special place in today’s London for embracing incoming cultures. Peter Heath, design director for public realm improvements at Atkins is a Londoner, whose approach to the challenge of considering the northern, less well known section of Brick lane, is demonstrated in his “past, present and futures” triptych. From Peter’s comic novel style imaginings, starting with the brick and tile making, originally by Flemish immigrants in the 16th century, to today’s community mix, he is highlighting both continuities and dramatic changes, in the architecture and use of the area’s streets and spaces. His vision for the next transitions of Brick Lane to 2073, literally spins into orbit!!!”

Paul Vick: After the Party

“The Whitecross Festival on Whitecross Street, which hosts diverse street art, had finished the day before I arrived. Workmen dismantling the art, gallery staff, passersby and shopkeepers shared jokes in the happy afterglow of the festival and its artistic endeavour. Provocative (like the ‘Rise’ piece in front of the hi-rise or suspended ordinance), ambiguous (the clown’s expression), the remaining artworks some even dislocated from their intended place took on a life of their own against a variety of architecture, such is the power of art and architecture to enrich our experience, and this is what I was interested in capturing”.

“I was struck by the mirroring of shapes from past and present, and the light angles. I tried some other views and buildings of interest in my square but this one retained its power”.

“The area formed part of the walls of Londinium (Barbican is from the Latin Barbecana meaning fortified outpost or tower). The site was used as a burial ground during Anglo-Saxon times, later becoming a Jewish cemetery and finally an un-consecrated burial ground for non-conformists.

In the 17th century the City fathers refused permission for theatrical productions within the City. As the Barbican lay outside the walls it became the centre for amateur theatricals and entertainment, alongside a warren of slum housing and impoverished dwellings.

The site was destroyed by German bombs during WWII, brutally revealing much of the area’s history.The present-day development commenced in 1958, taking 20 years to complete, and is Europe’s largest arts centre. The picture shows The Barbican as a graveyard – the residential towers as tombstones. Contemporary dancers perform whilst being watched by ghost-like figures of evacuees who lived there and were never to return”.

The 10×10 charity auction helps to raise funds for Article 25. All proceeds of the sale of the artwork will go to Article 25 building Street Children Centres.

For further information about the exhibition or auction please visit www.10x10london.com 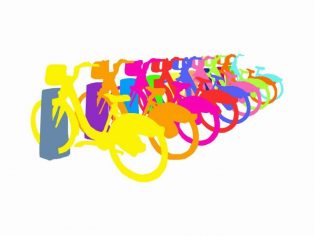 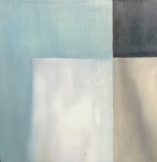 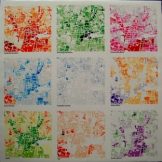 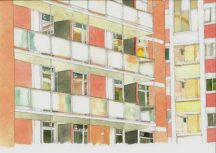 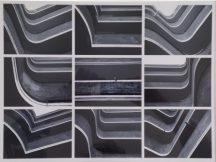 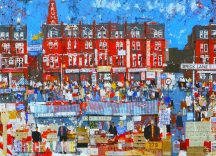 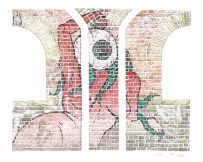 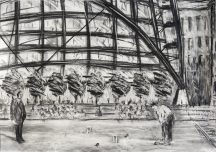 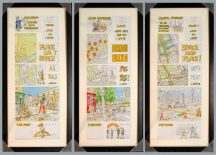 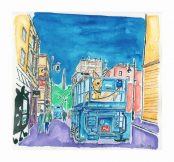 Paul Vick: After the Party