Since opening to the public on the 24 November, the Design Museum in Kensington has welcomed over 100,000 visitors through its doors. This unprecedented interest in the museum has created a strong base for reaching the expected visitor figure of 650,000 for the museum’s first year of opening.

Attracting between 200,000 and 250,000 visitors annually in its previous location in Shad Thames, south-east London, the museum’s new building in Kensington has reached half of this figure in its first four weeks. The move to Kensington offered the museum a larger building, state-of-the-art facilities, the chance to display a free permanent collection display and improved transport links, all proving to be decisive factors in the improved audience footfall. In addition to the free-to-visit permanent exhibition Designer Maker User, the Design Museum also offers two temporary galleries currently displaying the exhibitions Fear and Love and Beazley Designs of the Year.

‘It’s enormously encouraging to see the museum attracting so many visitors. We always believed that there was a big audience for contemporary design and architecture. After being closed since the summer, it’s great to have such an enthusiastic audience coming in such high numbers.’

Working closely with the Kensington High Street Business Forum, local shops and restaurants are also reporting an increase in footfall and sales as the museum supports the revival of one of London’s landmark high streets.

Cllr Nick Paget-Brown, Leader of the Royal Borough of Kensington and Chelsea:

‘The Design Museum is a marvellous addition to Kensington High Street. The museum adds to the borough’s already impressive reputation for outstanding cultural institutions, and I am delighted that the Design Museum is bringing many more people to the area.’

Following an investment of £83m, the Design Museum has transformed one of London’s great modernist buildings into its new home. Architectural designer John Pawson has redesigned the interior, his first major public building, to create a dramatic atrium highlighting the building’s original and iconic hyperbolic paraboloid roof.

‘London is the design capital of the world. We’re a global leader, attracting the very best companies and talent, so it makes perfect sense that we should have the world’s best design museum. From the Tube to the television and the World Wide Web, London’s visionary talent has consistently led the world with its ingenuity and invention. I’m delighted that many more Londoners and visitors to the capital are celebrating London’s place in the world of design and enjoying the Design Museum’s outstanding exhibitions in its brand new home in Kensington. I’m so pleased that the facilities are available to more school children than ever before – inspiring the designers, engineers and artists of the future. I encourage every Londoner to take the time to visit this fantastic hub of imagination and creativity.’

Founded by Sir Terence Conran, the Design Museum opened in 1989 in a former banana ripening warehouse on Shad Thames, following its successful original incarnation opening in 1983 as the Boilerhouse Project, in the basement of the V&A. Remaining at Shad Thames until 30 June 2016, the Design Museum mounted a host of critically acclaimed exhibitions, including shows dedicated to the work of Lord Richard Rogers, Thomas Heatherwick, Dame Zaha Hadid, Dieter Rams, Ettore Sottsass, Sir Paul Smith, Christian Louboutin and Sir Kenneth Grange.

The Design Museum’s forthcoming exhibition programme for 2017 includes displays on designing for our ageing population, the unbuilt architecture of Moscow in the 1920’s and 1930’s and a landmark exhibition exploring the counterculture of California. 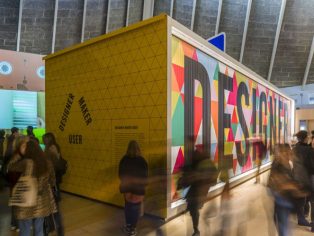