New London Architecture, the capital’s built environment think-tank, has today released 100 ideas to solve the London housing crisis, the result of an international ideas competition. Organised in collaboration with the Mayor of London, the competition attracted over 200 entries from 16 countries around the world.

The 100 shortlisted ideas will be on display in a free public exhibition at the NLA galleries in The Building Centre from 15 October. Ten winning ideas, selected by a distinguished jury, will be announced in October, with winning submitters invited to join a Greater London Authority working group to examine how their ideas can be applied to real London sites to deliver future housing for the capital.

Attracting submissions from world-renowned architects including Rogers Stirk Harbour and Partners, Grimshaw, Farrells, dRMM, Mae Architects, Feilden Clegg Bradley and SimpsonHaugh and Partners, as well as developers, consultants, local boroughs and everyday Londoners, the shortlist presents a selection of radical ideas from living on the Thames to the creation of a new mega-city.

As London debates where to house a growing population, a number of ideas examine how we can increase densities in town centres, around stations, and in the suburbs.

The redevelopment of London’s suburbs proved to be a strong theme with Alastair Parvin and Adam Towle in partnership with the WikiHouse Foundation proposing the introduction of a new initiative called ‘Right to Replace’. The scheme would enable homeowners to demolish their properties in the suburbs to create their dream home but only if they use half the space. Suburban houses are often inefficient with energy and land, so this concept would provide new eco-friendly homes, designed to the owner’s preference, whilst freeing up space for an extra residence.

More ambitious proposals includes transformations of the outer London region, such as property consultants GL Hearn’s idea for a mega-city near the M25, supplying a vast number of new homes as well as new workspaces, retail, public realm and infrastructure links.

Making better use of London’s canal and river network proves another strong theme. Baca Architects’ entry would create 7,500 new fixed-placed floating homes on the city’s canal network, which they believe could be completed in a mere 6-12 months. Similarly, architecture studio dRMM have worked on a scheme called Floatopolis, a larger, more utopian vision to transform London’s famous docks and sites on the River Thames into water neighbourhoods that not only encompass housing but also lidos, open-air cinemas, workspaces, cafés and schools.

Continuing this line of enquiry, Farrells and Buro Happold collaborated to look at the Thames from an infrastructure viewpoint. Through the creation of low-level bridges across east London, the duo suggests that a further 50,000 new homes could be created simply through areas becoming better connected with transport links. There are currently 34 bridges in London, only one is situated east of Tower Bridge. The creation of these bridges would encourage investment in a number of areas that are currently being overlooked.

Others explored infilling unused land, with ideas ranging from brownfield sites to repurposing rooftops. WSP | Parsons Brinckerhoff’s research into delivering housing on top of existing public buildings such as hospitals, schools and libraries suggests that a total of 630,000 new homes could be delivered through this method – far outnumbering the current need of 440,000. Bell Phillips Architects proposes adding modular housing to the flat roofs of post-war housing estates, whilst Akira Yamanaka Architects’ submission aims to create micro-housing in the gaps between terraced and semi-detached homes.

Self-build communities were put forward as a viable option with the emphasis falling on homeowners to take the future of their properties into their own hands. Ideas ranged from an app that located sites for future development to a new ‘build-to-own’ financing and ownership model by Savills.

Global architecture practice NBBJ presented one of the more dramatic transformations of the London streetscape by replacing a selection of roads with rows of new dwellings. With 9,000 miles of streets in London – equating to over a third of London’s built surface area – changing sections of the current road network would create more pedestrian-friendly areas and a better community feel for residents.

Entries submitted demonstrated that designers are interested in developing new construction methods and pre-fabrication. A flexible apartment plan designed by Levitt Bernstein that would allow the occupant to transform the floor plan from a one-bedroom to a four-bedroom showcased how construction could provide adaptability. Y:Cube by Rogers Stirk Harbour and Partners shows how prefabrication can make well-designed, single apartment homes easy and cheap to manufacture within factories.

‘The scale of the challenge is so big that we genuinely need some fresh thinking. There are a lot of new ideas here particularly new approaches to tenure and off site construction.’

All 100 ideas will be on display in the exhibition New Ideas for Housing from 15 October to 17 December, accompanied by a programme of events to establish how London’s housing needs can be met. 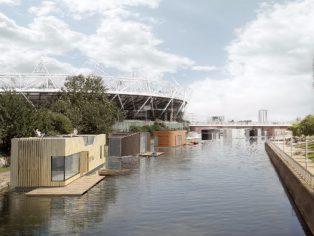