100% Design is delighted to announce that over 28,000 visitors (ABC Pending) attended the show’s 20th edition over four days two weeks ago (17-20 September 2014), and that the number of exhibitors also rose to the total of 450 this year.

Since the show’s acquisition in 2011, new owners Media Ten have increased the total footfall by 36%. The show organisers also look ahead to moving to the new venue Olympia London in 2015.

Overall, the 2014 show was attended by over 19,000 architects and interior designers, representing 70% of the total number of visitors. The show was most attended by UK visitors (81%), followed by those from Europe (13%) and the rest of the world (6%). Furthermore, only 9,000 visitors attended other design events during this year’s London Design Festival.

Led by Show Director William Knight, 100% Design increased its overall exhibition space by 20%, showcasing an array of global design brands and thought-provoking features over 22,000 sq m within Earls Court. The show also marked its 20th edition this year before moving to Olympia next September.

“100% Design 2014 was a great success for us; overall, we have received an overwhelming number of positive responses from visitors, exhibitors and collaborators. I believe the 20th edition truly demonstrated our commitment to design and innovation, and that we have produced a top quality show where visitors could find new ideas and innovative products, but also connect with others and engage with our features, which strongly supported our 2014 show theme.”

“There were no features at the first event many years ago, but now it looks amazing and full of sparkle.”

100% Design welcomed visitors to its 20th edition this year with a specially commissioned glass chandelier, Ice, made by leading designer and manufacturer of bespoke light fittings Lasvit in conjunction with architect Daniel Libeskind.

Alongside Emerging Brands and International Pavilions, four industry hubs showcased Interiors, Kitchens and Bathrooms, Workhouse and Eco, Design and Build, each with an engaging and interactive feature at its heart; from Foam Dome by vPPR architects – a geodesic dome pavilion made from bubble foam, to iAlter by NBBJ architects, a kinetic sculpture that flexed in response to visitors flowing through it.

2015 sees 100% Design re-launched in a dramatic new setting. Set within the iconic Grand Hall at Olympia, the UK’s largest design exhibition will have a brand new layout, providing a unique launch platform for over 2,000 products. The new destination in West London is within a stone’s throw of the newly located Design Museum from 2016.

“100% Design proved a successful platform for Vitra in terms of international exposure and promotion. The installation design content was interesting and exciting, and combined with the seminar series, created a high quality, professional and commercial visitor experience during London Design Festival.”

“Having a dedicated Heal’s Discovers Space at 100% Design provided an amazing opportunity. Being one of the key LDF destinations, it’s a great platform for Heal’s and the designers to have a captive furniture and design audience of trade, press and customers. Visitors could also hear first hand about the inspiration and people behind the product.”

“We were pleased to announce the launch of Case’s updated Robin Day 675 chair at 100% Design as well as showcase new 2014 products, all of which were very well received, in particular the 675. Overall it was a very positive show.”

“We chose 100% Design as the venue for our official launch in the UK. We received great support, the exhibition was a success and provided us with a high level of brand visibility and direct contact to the English and indeed the international market.”

“100% Design was a great show to debut Frassk and launch our new collection of Carrara marble washbasins by Paul Crofts Studio. We had a good location within the Kitchens and Bathrooms Hall and many visitors come to our stand over the four days resulting in some very positive leads.”

“This was the first time we have exhibited at 100% Design and we were really pleased with the quantity and quality of visitors to our stand. There was real interest in our new Focus SB Smoothie® product and we have a significant number of new contacts to follow up. We had no hesitation in booking for 2015.” 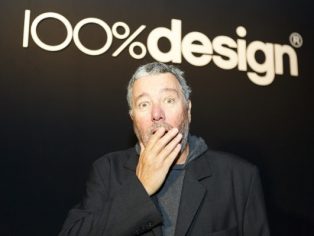