Jointly leading the multi-disciplinary, international design team are architects John McAslan + Partners and Woods Bagot, whose bold, can-do architecture will give the station an entirely new functional and experiential vibe.

Key heritage qualities of the 112-year-old station will be emphasised along with the introduction of new architecturally-inspiring elements as part of a scheme that amplifies Central Station as a Sydney icon. Signalling a step-change in the station’s functional, urban and cultural contributions to the city, the project will trigger much higher levels of people-movement and energy, and wider civic and commercial renewal.

John McAslan, Executive Chairman of John McAslan + Partners, states: “We are delighted at being selected to work on such a prestigious transport initiative, and are looking forward to contributing to this landmark project.

“The world’s leading cities, Sydney among them, are under extraordinary pressure in terms of the development of transport infrastructure in relation to urban fabric. With 96 per cent of Sydney train services currently calling at Central Station, this interchange performs a critical function and impression of the city,” Mr McAslan said.

Woods Bagot Principal, John Prentice, describes customer centered thinking as one hallmark of the design process to “transform Sydney’s Central Station into a place like no other”.

“Generous, distinctive and memorable, Central Station’s new underground concourse will eliminate the “travel trudge”. Our design approach has been to walk in the shoes of the customer every step of the way to create a truly great experience.

“Finding your way around intuitively in uncluttered and beautifully finished spaces has been a major design focus. Customers will freely and effortlessly move through the space, know where they are at any time, and change easily between trains, buses, light rail and the new Sydney Metro,” said Mr Prentice.

Design leader for Woods Bagot, Neil Hill, says the concept design is intended to be purposeful, functional, sculpturally rich and synthesised with the historic qualities of the original station. While delivery of the core scope of works has been a priority, the design also creates a series of “urban rooms” – civic scale spaces such as new triple height spaces as part of a broader urban and civic approach.

“The craft and richness of stonework evident in the existing building are reinterpreted to form new textured sandstone walls into the new Metro Box, establishing the exceptionally crafted subterranean architecture firmly within the historic precinct and providing a civic quality to the new station works,” Mr Hill said.

Below ground, the atmospheric qualities of volume, surface, and natural light characterise the design scheme for the Central Station upgrade. With respect to existing hierarchies of arches and materials, the proposal has a clear relationship with Walter Vernon’s architecture of the station above. While the interfaces between old and new will be quite distinct, they will be architectural segues rather than jump-cuts.

Central Station is the backbone of Sydney’s public transport network, with more than 250,000 people passing through the station every day. That number is forecast to grow to 450,000 in the next two decades. The Central Walk concourse will better connect customers to trains, buses, light rail and the new Sydney Metro. Features of Central Walk include:

“Central Station Metro is a once-in-a-generation opportunity to create a lasting legacy for the people of Sydney. My full credit to the Woods Bagot collective intelligence model – forging great relationships with Transport for NSW on the back of the Wynyard Walk project and Laing O’Rourke on the Sydney Yard Access Bridge, and in the collaboration with John MsAslan + Partners. Equally, it’s a measure of the skill and dedication of our growing transport team who worked intensely on the bid for many months.” 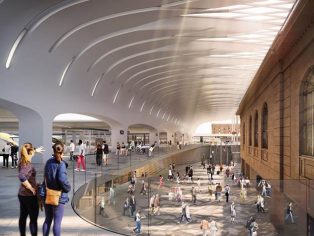